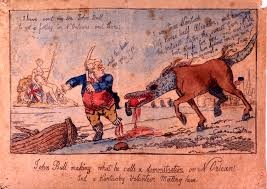 Alligator-Horses is a documentary film about the raunchy youth of 1830s America viewed through the lens of the first decade of the twenty-first century. Materials used to evoke our perspective of the time include Penny Press newspapers, Davy Crockett Almanacs, Blackface minstrel songs and a cast of contemporary scholars including Rice faculty and students. The three-hour documentary is structured in five parts around famous and less known events, including King Philip’s War, Davy Crockett’s tour of the northeast, the murder of Helen Jewett a New York prostitute, Jim Crow at the Bowery Theater and the Anti-Abolition riots of 1834. The conference begins with a reception followed by a screening of Alligator-Horses on Friday, March 21, 2014.