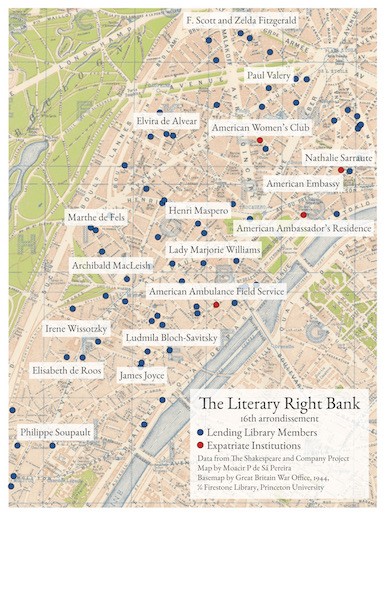 Spatial Humanities Public Lecture: "The Shakespeare and Company Project: Recreating the World of the Lost Generation" by Joshua Kotin

In 1919, an American named Sylvia Beach opened an English-language bookshop and lending library in Paris. She called it Shakespeare and Company, and it soon became the meeting place of a community of expatriate writers and artists that included Gertrude Stein, Ernest Hemingway, and James Joyce. In 1922, Beach published Joyce’s Ulysses under the Shakespeare and Company imprint -- a feat that would assure the bookshop and lending library’s iconic status. The Shakespeare and Company Project is a digital humanities initiative that recreates world of the bookshop and lending library -- the world of the Lost Generation, of the avant-garde. Using two sets of records from Beach’s archives at Princeton University, the Project tracks what members of the bookshop and lending library community read and where they lived. The Project also captures how the community changed from the end of World War I to the German Occupation of France, and the community’s connections to French writers and artists. The talk at Rice will present a preview of the Project -- its aims and discoveries, its connection to work in the spatial humanities. The talk will also discuss the Project’s history and the challenges of working with historical archives.