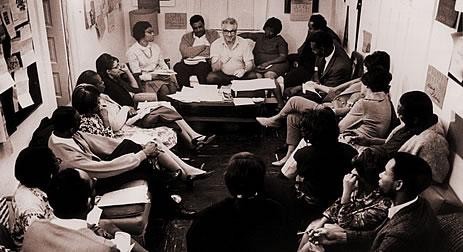 This talk explores the Watts Writers Workshop, founded in the heart of Watts by Jewish American writer Budd Schulberg immediately after the Watts Rebellion of 1965, and argues that the success and final demise of the project tracks Schulberg’s shift from prose to property. Drawing on Schulberg’s archives, including lease contracts, letters, and personal notes, I argue that Schulberg’s personal and financial investment in Watts re-located his political standing as the “neighbor” to the Watts writers with whom he worked. The catch is that being a neighbor subjected Schulberg to political marginality and police harassment, culminating in the FBI sabotage of the Workshop (it was burned down by an admitted FBI plant in 1973). Schulberg never fully understood his outsider-insider status, a claim I substantiate through a careful reading of a conversation between Schulberg and James Baldwin, where Baldwin is able to peel back the multiple layers of identity sustaining whiteness’s controlling claims on black property, thereby recalibrating what “Jewish” and “black” meant to each other in Watts and beyond.