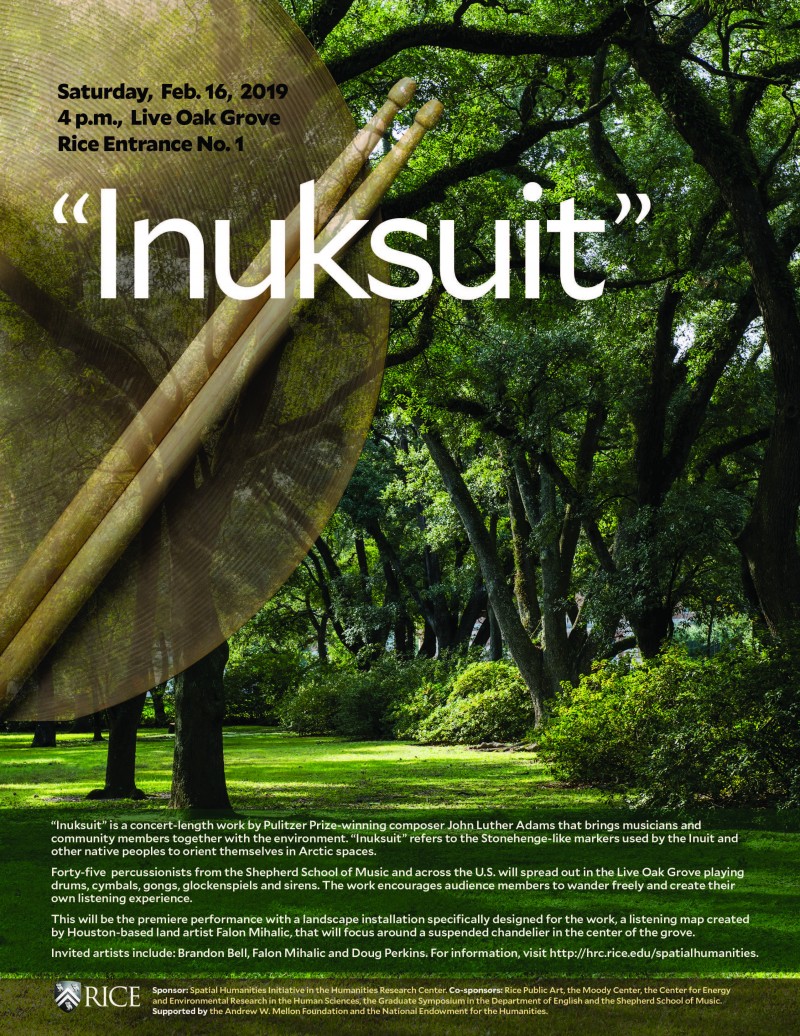 Hailed as “…the ultimate environmental piece” by The New York Times, Inuksuit is a concert-length (60-70’) work that brings musicians and community members together with the environment. The title refers to the Stonehenge-like markers used by the Inuit and other native peoples to orient themselves in Arctic spaces. Adams structured the rhythmic layers in the score to mimic these stone shapes, but undefined areas of the score also exist that allow individual interpretation of the music that reflects the sense of freedom conveyed in the work.

“Inuksuit” translates literally: “to act in the capacity of the human.” The work is haunted by the ever-present vision of the melting of the polar ice, the rising of the oceans, and what may remain of humanity’s presence after the waters recede.

Forty-five percussionists from Rice University’s Shepherd School of Music and across the U.S. will spread out in the large live oak grove playing drums, cymbals, gongs, glockenspiels and sirens. Inuksuit will be directed by Doug Perkins and produced by Brandon Bell. This will be the premiere performance with a landscape installation specifically designed for the work by Falon Mihalic.Using boulders, wood, and cables, Mihalic’s design will create a listening map focused around a suspended chandelier in the center of the grove.

The performance is free and open to the public. Audience members are encouraged to bring folding chairs or blankets and footwear appropriate for comfortable outdoor walking. Parking is also free on a first-come, first-served basis in the Lovett Lot beginning at 3:30 p.m. The length of the work ranges between 60 and 75 minutes depending on various environmental factors.

This performance of “Inuksuit” is sponsored by the Spatial Humanities Initiative, funded by the Andrew W. Mellon Foundation and the National Endowment for the Humanities. The event is co-sponsored by Rice Public Art, the Moody Center for the Arts, the Center for Energy and Environmental Research in the Human Sciences, the English Department Graduate Symposium and the Shepherd School of Music.

John Luther Adams (b. 1953) is one of America’s most-performed living composers. Having spent the majority of his adult life living in Alaska, his work is uniquely imbued with a heightened sense of eco-awareness. His orchestral work, Become Ocean, was awarded the 2014 Pulitzer Prize in Music. Writing in The New Yorker, critic Alex Ross described John Luther Adams as “one of the most original musical thinkers of the new century.”

Sydney Boyd is a scholar, teacher, violinist and public writer. She received her Ph.D. in English from Rice in 2018 and currently holds the Spatial Humanities Project Manager Fellowship in the Humanities Research Center. Treating British and American literature, her research focuses on how musical duration shapes narrative conceptions of temporality and defines the 20th century as an era of literary experimentation with musical time. One chapter of this project, “The Color of Sound: Hearing Timbre in Ralph Ellison’s ‘Invisible Man,’” is published in Arizona Quarterly (fall 2018). Working across departments and disciplines, her most recent work centers on live performance environments and active engagement with musicians, artists and composers.

Brandon Bell is an arts administrator and percussionist in Houston, Texas. He is director of education and community initiatives at Da Camera chamber music and jazz, and is an adjunct faculty member at Houston Community College. He is currently writing his dissertation for completion of the Doctor of Musical Arts degree at Rice University’s Shepherd School of Music. His research and performance interests focus on how music interacts with the natural environment, especially through ecoacoustic music. He has produced the work in five different locations in the last decade.

Falon Mihalic is a landscape architect and land artist working in sculpture, painting, textiles, and site installation. The landscape experience—from the microscopic plant cell to the landforms of regions—inspires her work across multiple media types. She received a Master of Landscape Architecture degree from the Rhode Island School of Design in 2012. Her recent public art project, Color Clouds, was produced in partnership with the East End Foundation with support from the City of Houston. Her work has been exhibited in galleries and public spaces in Houston, Dallas, Chicago, Providence, and Boston.

Doug Perkins is a musician who specializes in new works for percussion. His work focuses on large-scale events that encourage a sense of community and alternative experiences of live music. He has built a reputation as a foremost producer and collaborator of John Luther Adams’ compositions. His productions of Inuksuit in Central Park and the Park Avenue Armory were named Top Ten Performances in 2010 and 2011 by The New Yorker, New York Magazine, and Time Out NY and hailed “one of the most rapturous listening experiences of my life.” Most recently, he premiered of Adams’ Sila at Lincoln Center. He is presently on the percussion faculty at the Boston Conservatory.