Waste is omnipresent. The more it surrounds and shapes the conditions of life and culture, the more urgently it solicits attention. Since the pioneering work of Mary Douglas, who understood waste as “matter out of place,” waste has been understood by a range of disciplines through ideas of materiality or the object. A set of linked terms—garbage, detritus, rubbish, and trash—have come to the fore as have analyses dominated by tools, commodities, and things. Even William Viney’s quite recent Waste: A Philosophy of Things, which considers new avenues of thought in the temporality of waste, focuses on the “thing”-ness of waste. Without excluding such approaches to the encroaching solidity of waste, this seminar approaches waste not merely as a noun but as a verb and thus as a process, a system of use, a nexus of interconnection, and a set of relations. Waste is not merely an assemblage of things to be analyzed but a set of activities and impulses. This seminar will gather thinkers across arts, architecture, humanities and social sciences to consider various rubrics of waste. Participants will take part in a series of intensive, thematic working groups culminating in a symposium and a multi-disciplinary, multi-authored open-access publication on histories and futures of waste.

Waste is not only omnipresent but its multiple dimensions and complexities demand a new analytics of waste built out of a wide variety of approaches and methods from a range of disciplines. It is an inherently interdisciplinary phenomenon that enables conversations across the humanities and sciences, ecology and spatial studies, poetics and urban planning, arts practice and environmental engineering, social analytics and architectural studies.

As a first step in this new analytics of waste, in February 2016 CENHS convened a group of sixteen multidisciplinary scholars at Rice, in addition to invited international experts, to participate in an intensive seminar on the theme of waste and its parallel materials and processes. The impulse behind the discussion was that if in the past waste could be taken as largely local and temporary – a stage in a cycle from resource to waste to resource, again – today, that cycle is rupturing at multiple scales and at accelerated speeds. The results are not simply transformed forms of ‘nature’ but are the grounds for shifting social, political and environmental challenges.

Both the scope and scale of waste have changed over time, from urgencies around managing toxic waste materials to the slow, accumulative logic of waste remainders as cyclical components of larger biotic and abiotic systems. Conversations over the course of the day took the concept of waste as a sphere of aggregation and as a locus to question the limits and possibilities of waste as a form and dynamic. Discussions also queried whether there are salient distinctions to be made between waste and toxicity, or decay and ruin. With the awareness that waste has chronicity, we explored what Mel Chen has described as “slow and dreadful,” toxicities and what Rob Nixon has called “slow violence.” The purpose of this workshop was to begin to explore how people encounter waste, particularly the unequal distribution of it. Recognizing waste as heterogeneous, the seminar centered on how contemporary waste, as process and form, is a particularly pressing human concern; our intent was to begin uncover and analyze how it is so.

In spring 2017 and AY 2017-18 the Center for the Study of Women, Gender and Sexuality is hosting a series of major invited speakers and discussion fora on the topic of gender and environment, broadly conceived. Confirmed already are scholars working on toxicity, health, disparities and contamination, subjects that share a close analogue with waste. The HRC workshop would build upon and extend the conversations taking place in these events and we would invite a handful of CSWGS faculty and post-docs whose research is especially pertinent to participate in the waste workshop.

“Waste: Histories and Futures” will continue and expand these rich conversations through talks, debates, roundtables, workshops, arts projects, and collaborations. 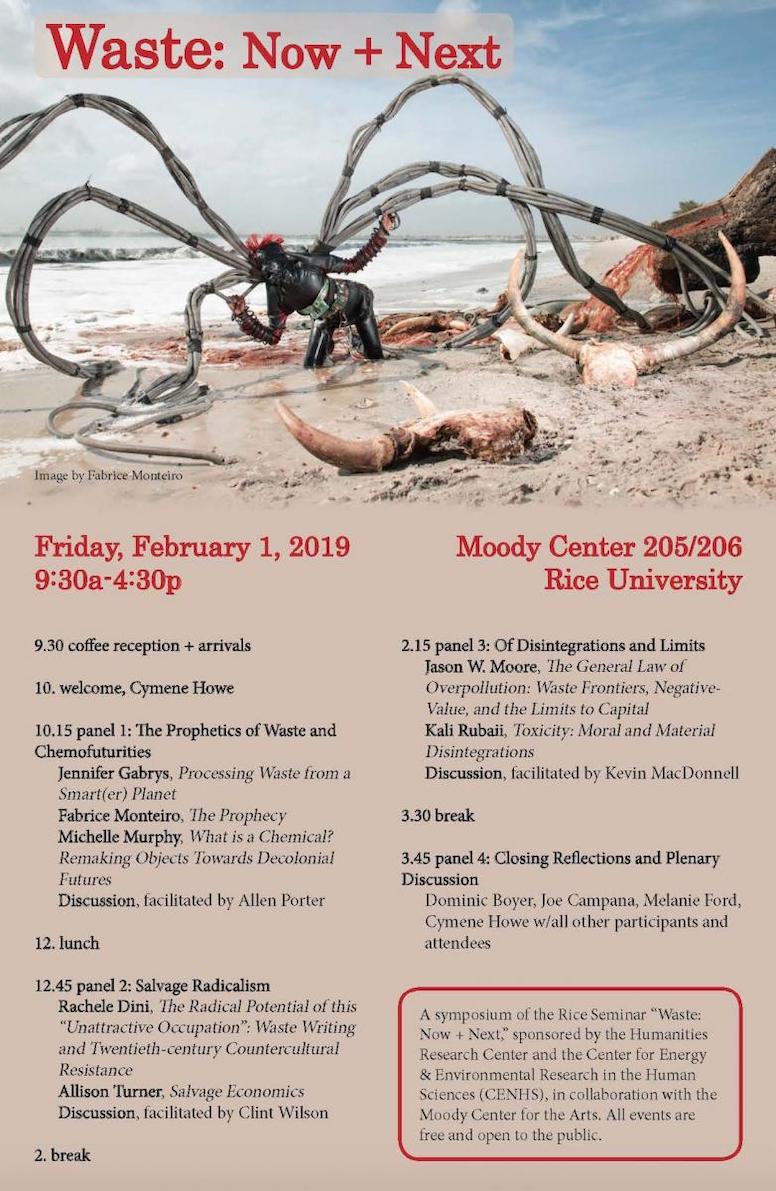